Galena
Galena (PbS) is a mineral from which lead and possiblly silver are extraxted. It contains lead at a percentage of 86.6 by weight (wt/%), but this content cannot be found in nature, as there are trace elements in its structure, such as silver (traces of up to 0.36 wt/% Ag), antimony (traces of up to 3 wt/% Sb) and bismuth (traces of up to 5 wt/% Bi), either as substitutes of lead, or with a presence of micro-enclosures of argyrite (Ag2S), miargyrite (AgSbS2) or matildite (AgBiS2). From the oxidation of galena can be generated cerussite (PbCO3) or anglesite (PbSO4).
The main types of lead deposits that also contain silver and many times are not separate but coexist with minerals and concentrations of zinc (sphalerite) or other metal sulfur compounds, as they can be found in Greece, are the following:
1. Skarn-type deposits, related to intrusions of granitoids (e.g. parts of the deposits of Lavrio and of Madem Lakkos in Chalkidiki).
These deposits are formed in the contact zone between intrusions of bodies of granitic magma and carbonate sedimentary rocks as are limestones and dolomites. Hot fluid contents of the granitic magma, rich in silica, iron, aluminum and magnesium dissolve the rich in calcium carbonate rocks and transform them into skarn-type deposits through a metamorphic process, which is called metasomatism. The skarn-type deposits consist of ores of copper, lead, zinc, iron, gold, molybdenum, tin and tungsten.
2. Compact sulfides related to submarine volcanism (Kuroko-type).
3. Compact sulfides from the substitution of carbonate rocks. In this category we can distinguish:
• Deposits that have been created by the intrusion of granitoids of high temperatures (semi-acid minerals that are created by the intrusion of magma through plications, fissures or faults in acid rocks in the outer crust, rich in SiO2), usually in combination with skarns (e.g. deposits of Lavrio, Maden Lakkos, Olympiada, Madan in Bulgaria).
Refer below to the typical examples of the deposits of Mavres Petres and Olympiada, in Chalkidiki.
• Mississippi Valley-type deposits (Layer-enclosed in carbonate rocks). They have been deposited by hot high salinity solutions similar to the ones of the oil fields, that migrate to waterbeds that are developed in carbonate rocks near epicontinental sedimetation basins (e.g. ores of Thasos).
• Epithermal-type multimetal veins (e.g. Aghios Philippos, Kirki).
• Sedimentary deposits in clastic and volcaniclastic rocks (SEDEX) (e.g. Rammelsberg, Meggen, Germany).

The deposits of Northeastern Chalkidiki
The area of NE Chalkidiki has a particular ore geologic – mining interest, due to the presence of large deposits of basic and precious metals and of the manganese deposits. For this reason this area consisted a permanent and very important mining center in the modern history of Greece, from the beginning of the century until today and the ongoing research and expansion of the deposits guarantees the continuation of the mining activity and development, not only of the area, but also of the wider area of Northern Greece.
The deposits are located in their greatest part in the Serbomacedonian geological zone, and more particularly in the Kerdylia Series, along the great fault of Stratoni-Varvara, which also delimits its contact with the Vertiskos Series. These deposits are mainly multimetal, of the type of substitution of carbonates (Mavres Petres, Olympiada, etc).
Important metalliferous concentrations of precious and basic metals can be also found in the rift area of Vina–Papades–Strebenikos. In the following figure are presented the deposits of Olympiada, Mavres Petres, Madem Lakkos and Piavitsa. 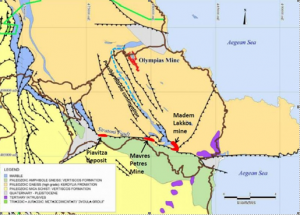 i. Deposit of Mavres Petres
The deposits of Mavres Petres and Madem Lakkos (older exploitation) are located within the marble horizon of the Kerdylia formation and close to the contact with the Stratoni fault. These deposits, as well as the one of Olympiada which lies to the North, consist multimetal deposits of compact sulfides. The deposit owes its formation to the granodiorite (granitoid formation) of Stratoni or even to the porphyry intrusions in the area that have an age of 21-29 million years.
(Note: Porphyry is a volcanic silicate rock that contains iron-magnesium minerals and originates from granitoid magma (granodiorites, diorites, etc.)).
The mineralisation in the area of Mavres Petres can be found along the fault of Stratoni – Varvara and within the upper marble horizon with a direction East to West and an inclination of 35Ο to the South. Below the marble horizon can be found, mainly, amphibolites (metamorphic rocks which contain silicate salts of calcium, iron, magnesium, potassium and sodium) & gneiss (metamorphic rocks which contain sodium and potassium feldspars as well as quartz) and, at some places, schists.
The deposit of Mavres Petres mainly consists of minerals of sulfide metal compounds, such as: iron pyrite (FeS), galena (PbS) and sphalerite (ZnS). Secondary minerals are: tetrahedrite (sulfide mineral of copper – antimony), chalcopyrite (CuFeS2), boulangerite (sulfide mineral of lead -antimony), arsenopyrite (FeAsS), marcasite, pyrrhotite (sulfide minerals of iron) and enargite (sulfide mineral of copper – arsenic).
The treatment products of the ore of Mavres Petres are lead-zinc-silver (Pb-Zn-Ag), which come from the treatment of the galena (PbS) minerals with an important concentration of silver (Ag) and sphalerite (ZnS). Gold can be also found, of submicroscopic dimensions (<1μm), which is characterised as difficult to treat and is not directly retrievable.
The exploitation of the deposit of Mavres Petres is in full progress and takes place completely underground.
In the last year, from the ore which is mined in the mine of Mavres Petres, is produced a concentrate of lead-zinc-silver, which amounts to approximately 60 tons per year and consists a basic export product.

ii. Deposit of Olympiada
The mine of Olympiada is delimited according to the geological division of Greece by the Serbomacedonian Zone and more particularly by the Kerdylia Series. The deposit of Olympiada can be characterised as a multimetal deposit of sulfides of lead-zinc-copper-iron-arsenic-silver which also contains gold. This was created by the substitution of carbonate rocks (see Geology-Mineralogy/Mineral resources-Ore Deposit Geology), by the intrusion of granitoid magma of high temperature.
These formations have been developed in marbles of the Kerdylia Series (the carbonate rocks that have been partly substituted and party transformed through recrystallisation) and have been deposited to break zones (mainly faults), through the circulation of hydrothermal solutions that have replaced the surrounding carbonate rocks. The hydrothermal solutions are probably due to the intrusion of granodiorite (semi-acid rock that is created by the intrusion of magma through faults or fissures where are also dragged acid rocks of the outer crust, with high SiΟ2 concentrations, and which is cooled at a great depth) of Stratoni within gneiss rocks (metamorphic rocks that contain sodium and potassium feldspars, as well as quartz) and within the marbles of the Kerdylia Series, or to porphyry intrusions (porhyry is a volcanic silicate rock that contains iron-magnesium minerals and originates from granitoid magma) that happened 21-29 million years ago.
The multimetal sulfide compounds of the deposit of Olympiada can be found in the form of the following minerals: iron pyrite (FeS), galena (Pbs), sphalerite (ΖnS), chalcopyrite (CuFeS2), arsenopyrite (FeAsS), and in much smaller quantities, they appear in the form of tetrahedrite (sulfide mineral of copper-antimony), cerussite (PbCO3), covellite (CuS) etc.
In the deposit of Olympiada there are also many appearances of manganese oxide in the form of a dense vein network, which represent the oxidized parts of the mineralisation of the primary rhodochrosite (MnCO3), in areas that are principally located in the upper parts of the deposit. Apart from the metal minerals, in the total mineralogical sum are also included gangue minerals, such as quartz, calcite, feldspars ((Na,K)AlSi3O8), kaolinite, etc, without any economic importance.
The ore of Olympiada is mainly located in lenticular layer-enclosed compact bodies and has a great content range regarding the above minerals. The main products that are produced by it are concentrates of lead, zinc, silver and gold.
The deposit of Olympiada is spatially divided into two distinct bodies, the Eastern and the Western Deposit, were the greatest part of the mineralisation is present. The Western Deposit has an average width of approximately 250 m, a length of 1200m, and plunges to the Southeast. The Western Deposit has always been a research and mining activity field in the past by the Greek Corporation of Chemical Products&Fertilizers and TVX Gold. Researches so far have found that the deposit expands at a depth of at least 600 m from the surface, while its expansion towards even greater depths has not been yet researched. The thickness of the Western Deposit ranges between 5 m and 15 m, with an average inclination of 30°-35Ο to the Southeast.
The Eastern Deposit is developed 150 m to the East of the Western Deposit. It reaches approximately 400m under the surface, and its possible expansion to even great depths is under examination. Its inclination ranges between 25°-30° to the Southeast. The average width of the Eastern Deposit is about 75 m and its average width is about 7 m.