Marble is a rock that consists of calcite (CaCO3), or of the combination of calcite minerals (CaCO3) and dolomite ((Ca,Mg) (CO3)2) and has been created by the metamorphism of limestones, that is of carbonate sedimentary rocks. The word’s origin is the ancient Greek work “marmaros”, which means “shiny stone”.
The use of marble had already begun in the 6th century, to a limited degree however, mainly in combination with tuffs at areas of the buildings that would be decorated by paintings or sculptures, or areas that would be more exposed to humidity. In the Classical era the use of marble had significantly increased, which resulted in the prevailing of marble in the ancient Greek architecture. Marble was called, at the time, as white stone or Pentelic, Hymettus or Parian stone, and apart from the quarries of Paros and Naxos that were already famous since the Archaic era, the exploitation of the Pentelicus quarry began in the Classical era. Other known ancient quarries were the ones of Eleusis, Tripoli, Argos, Selinus, Syracuse, Skyros, Vravrona, and of other areas.
The marble of each area had its own special features. The marble of Mount Pentelicus, for example, was a white, fine grained and relatively transparent marble, with a minimal amount of iron impurities, which had a reddish coloration in contact with the atmosphere, in contrast to the marble of Tripoli or Argos which was darker. The marble of Paros, white, coarse grained, of excellent quality and easily carved, was known as “lychnite”, because it was quarried in deep underground galleries that were lit by lamps (“lychnos” = lamp). The marble of Naxos, also white and coarse grained, but not of such an excellent quality as the Parian one, was used as the latter both in sculpture and in architecture. White marble, but difficultly carved was quarried in Thasos, which was exported to the coasts of Thrace and Minor Asia.
The commercial name “marble” characterises not only the stones that geology characterises as marbles, but also a series of other rocks, which can be cut into relatively thin slabs and which can be smoothed and polished. Such kind of rocks are limestones, dolomites, serpentinites, some conglomerates, etc.
The quality of marbles depends, to a considerable extent, on the composition of rocks they come from, as well as on the degree of their metamorphism. The colours of marbles vary. The pure calcite is white, but mineral impurities add colour to it. The colour of mables is, mostly, white – semi-white to grey in different tones, with a zone variation of colours, and in many cases the colour can even be black, greenish, pink, reddish, etc, which is usually due to the presence of organic substances or iron oxides or manganese oxides.
Pure crystalline Greek marbles are the white marbles of Pentelicus and of Dionysos, the white – semi-white marbles of the region of Drama- Kavala-Thasos, the marbles of Tranovaltos in Kozani, the marbles of Naxos, the pink marbles of Lafkos of Pelion, etc. Very famous foreign marbles are the marbles of the region of Carrara in Italy, the white marbles of Lasa in Italy, the Italian marble Giallo di Siena, the Portuguese Pink marble, the white marble Αfyon of Turkey with its sugar-like structure, the white marble Sivec of FYROM, etc.
Depending on the size of the grains of their crystals, marbles are characterised as fine grained (grain size between 0.01-0.5 mm), average grained (grain size between 0.5-2 mm) and coarse grained (grain size 2-6 mm). Fine grained marbles are considered to have a greater mechanical strength than the coarse grained ones. However, their strength also depends on their histological features.
The Greek marbles are among the most famous ones in the world. Apart from the existing deposits and varieties, they have been fully associated with the masterpieces of sculpture and architecture of ancient Greece. Thus, the demand for Greek marble has always been important and the sector is strongly export-oriented, and thus Greece is ranked between the major producers and exporters of marble at a global level.
In the last years the national annual production of marble products has exceeded 1,400,000 tons. The exports that take place mainly regard marble blocks with a total value that exceeds 90,000,000 €.
Today (2013), 75-80% of the total production of marble products, with a value of 226 million euros, is exported. Of the exported products, more than 30-35% is exported to China and the rest is exported to the Middle East, to the USA, and, to a lesser degree, to the European market. The reserves of marble deposits in Greece are huge, and there are many that consider them as practically inexhaustible. There is a great variety of marbles in various colorations and types, but there are mainly white marbles, some of which are among the best in the world. It is for this that Greece is considered as the country with the widest variety of white and light coloured marbles. Apart from the white marbles, there are many types of coloured ones, such as black, grey, beige, red, green and other marbles, which have very good quality features. Travertine and onyx of a very good quality are also quarried.
The principal modern quarries in Greece, can be found in the rich in marble regions of Drama, Kavala-Thasos (Eastern Macedonia), which is the most important quarry center of the country, of Kozani-Veria, Ioannina, Volos, Dionysos-Penteli, Livadia-Helicon, as well as in other regions (Argolida, Euboea, Skyros, Naxos, Paros, Tinos, etc.)
The exploitation of marbles takes place, principally, in the form of opencast exploitation (marble quarries), in which marbles are cut-off with the use of steel wire ropes or special equipment, with the eventual production of the rectangular marble blocks which are very characteristic in quarries.
Underground exploitations exist today in Greece only in the area of Dionysos in Attica. In the picture you can see the surface quarry as well as the entrances to the underground exploitation of marble at the quarry of the corporation “Dionyssomarble S.A.” 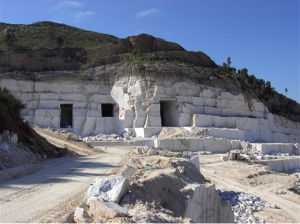