Coal – mineral coal – is a sedimetary deposit, of biogenic origin, which is rich in carbon. It has been created by plant remains (phytoclasts) of various forms, when these have gathered in a basin and have subsequently been buried within the earth.
The concentration of plant materials took place either “in situ” (autochthonous carbon), as in the case of concentration of herbaceous plants in marshlands, or after their transport to inland basins, fosses, or coastal areas, where they have been deposited (allochthonous carbon).
Subsequently, under the influence of temperature and pressure that exist in the interior of the earth, the plant material has been carbonised, with the help of anaerobic vacteria.
The course of the carbonation has led to various types of coal, which are the following: turf, lignite, sub-bituminous and bituminous coal, anthracite and graphite. From turf to anthracite, the carbon (C) content is increasing, while the moisture (Η2Ο) and the volatile components (CO2, CH4, NH3) are decreasing.
Turf has occurred from a small scale carbonation of herbaceous plants in marshlands. Its colour varies, depending on the pH of the carbonation environment.
Lignite contains up to 30% C. It is brownish-black, with a woody texture and it is not shiny. It produces smoke while burning.
“Bituminous” coal contains up to 85% C. Its colour is black, with a glassy shine and colours the fingers on touch.
Anthracites contain 92-95% C and 5-8% volatile compounds. They are shiny, they produce conchoidal fragments and do not colour the fingers on touch.
Graphite is almost pure carbon C and is produced from metamorphism procedures. Its hardness is rather low (Η=2, in the Mohs scale), it has a greasy texture and a grey-black colour. Its volatile compounds are <5%.
The “macerals” are the structural components of carbons, like minerals are the structural components of rocks.
In lignites and sub-bituminous coal the “macerals” can be distinguished into three main categories, the huminites, the liptinites and the inertinites, and to many other sub-categories.
The “macerals” in bituminous coal and in anthracites can be distinguished, respectively, to vitrinites, liptinites and inertinites.
Coal with a low degree of carbonation, and thus rich in volatile compounds, produces a smoke-generating flame while burning. Coal with a high carbonation degree, does not produce a smoke-generating flame while burning.
A characteristic property of coal is its calorific value, which is expressed in kcal/kg. The calorific value is distinguished in higher calorific value (H.C.V.) and lower calorific value (L.C.V.) and is measured in “natural” samples and in “dry” samples.
Indicatively, for the deposit of “Amyndaio” in Ptolemaida, the H.C.V. of “natural” samples is 2,000 kcal/kg. The higher calorific value of “dry” samples is 4,500 kcal/kg.

Coal mined in Greece
The first mining of lignite in Greece, began in Aliveri (Euboea) in 1873, but its intensive exploitation, in order to cover energy needs, took place only after 1950. Today, approximately 75% of the energy needs of Greece are covered by lignite. Thus, 85% of lignite is used in the production of electricity, while the remaining 15% is used in the production of bricks (~1%); lignite powder is used in metallurgy (3.6%), it is also used as fuel (~1%), in the production of nitrogenous fertilizers, etc.
All kinds of coal (turf – lignite – sub-bitumenous coal) that can be found in Greece are of Cenozoic age and have been deposited in inland or coastal basins.
84% of the lignite-bearing basins are of Neogenic age, 9% of Quaternary age and 7% of Eocene/ Oligocene age.
The most important basins are the ones of the area of Ptolemaida (Ptolemaida, Komnina, Aghios Christoforos, Perdika), which are of Pliocene age, of Megalopoli and Drama (Pleistocene age) and of Florina (Miocene age). Lignite can be distinguished in peaty lignite (25% of the deposits of Greece), lignite (64%) and sub-bitumenous lingite (11%).
Sub-bitumenous coal, of Eocene/Oligocene age, can be found in Alexandroupolis, Kozani, Grevena; its quality is very good, but has a minor economic importance. The turf deposit in Philippi, with reserves of 4.3×109 tons, is of Pleistocene age.
The total reserves of Greece in lignite are estimated to approximately 10×109 tons, of which the measured reserves are 6.8×109 tons, indicated reserves are 0.31×109 tons, inferred reserves are 1.95×109 tons, and hypothetical reserves are 0.86×109 tons. Of the 6.8×109 measured reserves, 3.26×109 tons can be found in Ptolemaida, 0.4×109 tons in Megalopoli, 1.55×109 tons in Drama, 1.15×109 tons in Elassona and 0.47×109 tons in Florina. The exploitation is opencast, and the main exploitation basins are the ones of Ptolemaida and Amyndaio (annual production of 43.6 million tons) and Megalopoli (8.9 million tons).
The lower calorific value (L.C.V.) of lignites that can be found in Greece ranges from 840 kcal/kg (Ioannina) to 7,000 kcal/kg (Kotyli, in the prefecture of Xanthi). In most cases the L.C.V. ranges from 1,800 to 2,600 kcal/kg for the Miocene age lingites, 1,000 – 1,800 kcal/kg, for the Pliocene age ones and <1,000 kcal/kg for the Pleistocene age lignites. Lignites with an L.C.V. >2,600 kcal/kg are quite few (<0.4% of the reserves).
In the wider area of Ptolemaida the calorific value ranges from 1,400 kcal/kg to 2,300 kcal/kg, while in Megalopoli it amounts to 950 kcal/kg.
The highest moisture content can be found in the lignites of Megalopoli (approximately 62%,), Ioannina (61%) and Ptolemaida (60%), while the lowest one can be found in the sub-bitumenous coal of Alexandroupolis (8.9%).
In general, the more the age of lignite increases, the more its calorific value and its volatile compounds content increase, and, on the contrary, the more its moisture content decreases. The peat content of lignites varies, even in the same deposit, given the fact that it depends on the percentage of argillic-marly-psammitic sediments the examined sample contains. However, the value usually ranges between 15-20% (a possible fluctuation is between 8-30%).
In the Greek lignites can be found all three types of “macerals” [huminites (> 75%), liptinites (4-17%) and inertinites (< 4%)]. Along with the “macerals” can be found minerals, such as iron pyrite (in the form of framboids or as pore filling material), calcite, siderite (FeCO3), kaolinite [Al4 Si4 Ο10 (OH)8], etc. In tephra have been traced heavy metals, such as Pb, Zn, U, Ba, etc.
The first serious attempt to exploit lignite deposits in Greece began in Aliveri (Euboea) in 1873. Unfortunately a tremendous flood in 1897 destroyed all the opencast and underground mining facilities . The exploitation began again after the First World War. In 1922 the annual production reached 23,000 tons and remained at that level until 1927. In the next year the exploitation stopped for economic reasons.
After the Second World War, the need of electrification of Greece led to the decision of the construction of a steam-electric power station in Aliveri, which would be exclusively lignite-based.
In 1951, DEI (the Public Power Corporation of Greece, or PPC) undertook the underground exploitation of the Mines in Aliveri, and achieved the increase of the production to 750 thousand tons per year and the supply of power stations of a total power of 230 MW. In the early 1980s the lignite mine in Aliveri was shut down.
The first systematic study and research in order to locate and evaluate lignites in the wider area of Ptolemaida began after 1938. In 1955 the corporation LIPTOL was established, having as object the exploitation of lignite and its use in the production of briquettes, nitrogenous fertilizers, semicoke and electricity. In 1959, 90% of the shares of LIPTOL came into the possession of DEI. In 1975 LIPTOL was merged into DEI. The production of lignite which amounted to 1.3 million tons in 1959, was increased to 11.7 million tons in 1975, to 27.3 million tons in 1985, and to 49 million tons in 2006 (including the mine in Florina).
The lignite deposit of Megalopoli was scientifically studied for the first time in 1957 and the results were encouraging. In 1969 DEI began the exploitation of lignite. This fact consisted a special case on a global level, since such a poor lignite was for the first time mined and used in the production of electricity. The lignite mine of Megalopoli began with an annual production of 1 million tons and reached 13.5 million tons in 2006.
Today, DEI produces approximately 63 million tons of lignite in total on an annual basis. The impressive growth of the lignite mines of DEI allows our country to be the second largest lignite producer in the European Union, the fifth largest in Europe and the sixth largest in the world. 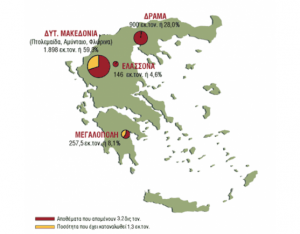