From the weathering of an argillic-silicate mineral:
A usual mineral of the group of feldspars, in many rocks, is the plagioclase. The plagioclase is a main mineralogical component of volcanic rocks (e.g. basalts, andesites) or of plutonic rocks of a respective chemical composition (e.g. gabbros, granites, plagiogranites) or of a category of psammite rich in plagioclase which is called arkose. The transport of rocks to the earth’s surface leads the plagioclase to a physico-chemical imbalance to the atmosphere. A weathering reaction of the sodium plagioclaste (albite) is the following (hydrolysis reaction):
2ΝaAlSi3O8 (albite) + 2CO2 + 11H2O → Al2Si2O5(OH)4 (kaolinite) + 2Na+ + 2HCO3 + 4H4SiO4
This reaction shows that the albite in the atmosphere can be eroded and at his place can be gradually deposited an aggregate of kaolinite crystals. At the same time rain water removes the remaining products of the reaction. Subsequently the kaolinite can be transformed into an aluminum mineral (gibbsite) with the simulatneous removal of silica. The gibbsite under certain conditions is dehydrated and is transformed into another aluminum hydroxide, the boehmite [γ-AlO(OH)]:
Although weathering reactions depend on the amount of water, they depend, in effect, on the duration of the reaction, which is also a function of the morphology (the position’s relief) and of the temperature of the atmosphere.
For the mining industry, the albite and the kaolinite are of no interest regarding the recovery of aluminum, while the gibbsite and the boehmite – depending on the available technology – are used particularly for this purpose, that is, they consist a mineral raw material of aluminum.
This means that under the appropriate conditions, a rock that contains albite or another appropriate argillic-silicate mineral can be transformed into aluminum ore through the weathering process.

II. Lateritic bauxite and karst bauxite
The term bauxite has been attributed by Berthier (1821), who analysed, in the “École des Mines”, materials rich in aluminum from the area of Βaux-de-Provence. It is generally described as an ore that is caracterised by the high content of aluminum hydroxides, of iron oxides and hydroxides, and, in smaller quantities, of kaolinite and titanium oxides. It was the Hungarian ore deposit geologist G. Bardossy, who proposed, in 1982, the classification of bauxites in two main types of deposits: deposits of lateritic bauxite and deposits of karst bauxite. The first are created in situ by the lateritic weathering of rocks rich in argillic-silicate minerals, while the second ones are created by the weathering of lateritic bauxites, the transport of the material and its deposition as a clastic sediment in mechanical traps of karst limestones. In Greece, there have not been found, until today, remains of typical lateritic bauxite, with the exception of small-scale appearances of bauxite material in the area of Vrontero in Prespes.

Karst bauxites
Contrary to the absence of typical appearances of lateritic bauxite, there are in Greece many deposits and traces of the category of karst bauxite, which have been formed in different geological periods and in various paleogeographic areas and consist today characteristic stratigraphic horizons in some geological areas of the Greek orogene. In these appearances must be added, of course, the appearances and deposits, which happened to be parts of areas that have been transferred in great depths in the Earth’s crust and then resurfaced, but with an altered mineralogical composition and physical properties, so that they can find application in other industrial sectors (e.g. emery of the Cyclades that can be used in the industry of abrasives).
The lateritic weathering crusts are eroded over geological time. In periods when the sea level rises (transgression periods) the weathering can occur by the action of waves (coastal erosion). The weathering materials are transported to lower morphological points and are deposited on the slopes of the foothills. Subsequently they can be transported as clastic materials through water streams and be deposited in mechanical traps that exist on the relief.
In the case of karst bauxites, these traps are karst cavities in limestone masses. These cavities are created when the limestones are exposed in the surface (emersion), and in this case, relatively soluble rocks get a relief that has the form of cavitations or troughs with irregular bottom layouts. The material which is transferred from the lateritic area in the form of mud, is trapped in cavities of this type.
After the completion of transfer of lateritic material and with the rise of the sea level, the bauxite lateritic material is gradually covered by calcareous rocks. The discovery in certain deposits, directly above the bauxite, of coal layers and the study of its characteristics (Kalaitzidis et al. 2010), has shown that the clastic bauxite material had been deposited in a marsh environment with slightly brackish water during the transgression of the sea over limestones.
The bauxite mud, both while it remained in the karst cavity, and after it has been covered by limestones, went through minor mineralogical alterations (e.g. generation of new aluminum hydroxides, as boehmite and diaspore and the formation of iron pyrite – marcasite (FeS2), and there has been a movement of mobile elements from the top of the deposit to its bottom (e.g. rare-earth elements). 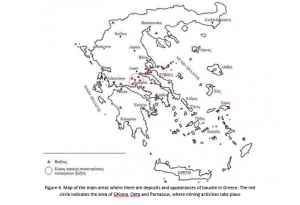 Greek Bauxite / Ore deposit geology/ Mining-Production
The bauxite deposits in Greece are of “karst” type. They were created by the lateritic weathering of basic, mainly, members (basalts, diabases, gabbros) of the ophiolite complexes, which abound in the Subpelagonian Zone. The largest deposits of bauxite, in Greece, can be found in the area (section) of Parnassus-Ghiona (Ghiona-Helicon, Oeta, Parnassus).
The colour of bauxites depends on their composition and particularly on the presence of iron oxides or hydroxides. There are:
• Red or brown-red bauxites (with the presence of hematite).
• Yellow bauxites (with the presence of goethite).
• Grey bauxites with a small percentage of iron oxides.
• White bauxites (with the absence of iron oxides).
Their Al2O3 content ranges between 49%-65%, the Fe2O3 content between 18%-24%, the CaO content between 0-5%, the SiO2 content between 2%-10%, the TiO2 content between 0.5-3%, and their Cr and Νi content can amount up to 2,000 ppm.
Bauxite consists the only raw material for the production of alumina and aluminium and is particularly important for our country. Bauxite can be also used in cement plants, in the production of cast iron as a flux and as a component of rockwool and of abrasive materials.
Greece holds a very important place, not only in the European Union, but also at a global level, as it is one of the major bauxite producing countries. 90% of the mining of bauxite in our country takes place in underground exploitations and 10% in opencast ones. The measured amounts of bauxite in Greece amount to approximately 130,000,000 tons and the annual production is over 2,000,000 tons.
The corporations S&B Industrial Minerals S.A., DELPHI-DISTOMON MINING S.A. and ELMIN S.A. are active in the field of bauxite exploitation.